Tomorrow is one of my most cherished day here in Bali. Nyiepi, the Saka new year, is a day focused on self-reflection, most Balinese-Hindu will choose to fast, meditate, and abstain from self-entertainment for the first day of the Saka calendar.

The traditional event starts three days before the day of silence with Melasti, a ritual aimed at purifying sacred images, such as statues, by bringing them to the sea and bathing them in blessed seawater. Then on Saka New Year’s Eve Tawur Agung Kesanga is held. This exorcism ceremony is Nyepi’s main attraction. 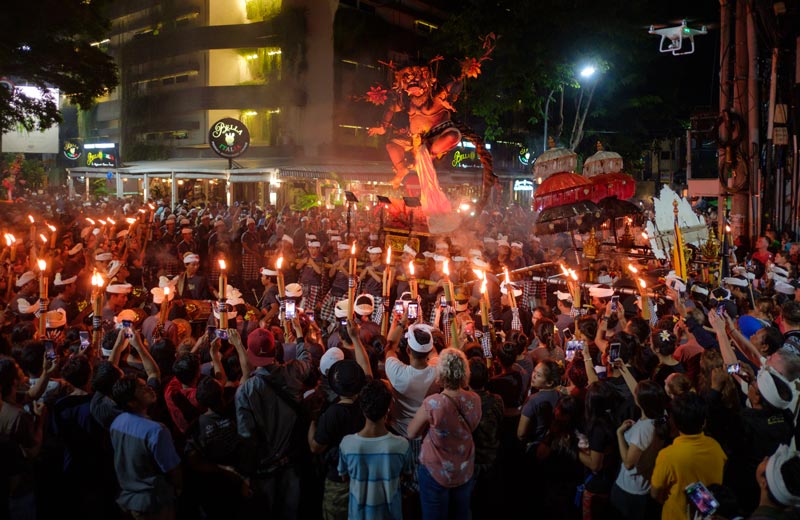 With giant hand-crafted demonic effigies known as Ogoh-Ogoh being paraded in the main streets accompanied by banging noises, firecrackers, and the gamelan (Balinese instrumental instrument) This ceremony’s goal is to purify the earth’s energy and restore balance while also driving evil spirits away and it is something I definitely advise you should experience at least once. Traditionally the Ogoh-Ogoh parade ends on the beach where they are burnt but some might still be exposed for another month after the ceremony or even bought by museums.

The following day, starting at 6 am, the day of silence finally begins, the only people allowed in the streets are the pecalang, (Balinese authorities), and ambulances, even the airport will be closed. While most tourists will stay at their hotel and enjoy the swimming pool and wifi, the day of silence is a great opportunity to meditate. Since no loud noises are to be heard and most activities on the island come to a halt, the calm environment allows us to take a look into ourselves, hear and see things much easier.

Like I previously mentioned most Balinese-Hindu choose to fast, abstain from speaking, self-entertainment, as well as not using light and modern technology, for it would interfere with their mind and hinder them in their meditation.

Obviously, it is not made for everybody but I think giving it a try for the first few hours of your day could be a nice experience. Just make sure to tell your partner/kids about it before hand ;).
I’m confident anyone can use some self-reflection or even just enjoy some peace and a quiet time to think back on the past 365 days. Find yourself, and where you are headed.
Now on my side internet and any other distraction will be off.

Selamat hari raya Nyiepi to all.

How to choose the best Yoga teacher training for you

The Births of 4 Major Yoga Types