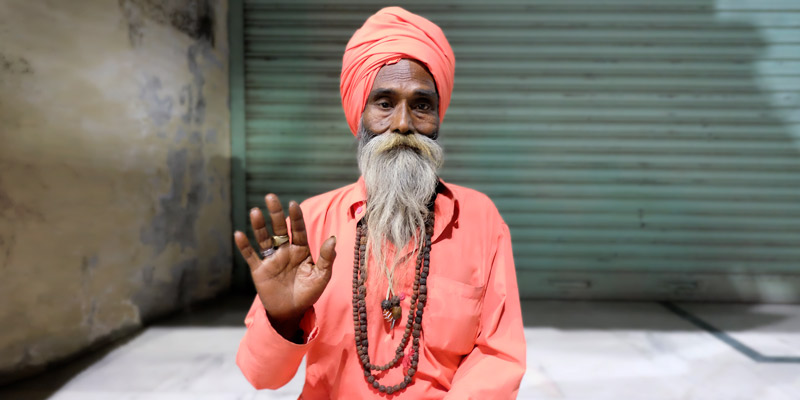 Here you will find a brief summary of the unique history of Yoga, from its traditional form to its modern practice as we more commonly know it today. To properly begin, it is important to locate where and when the word and the fundamental concepts of “Yoga” started to make their historic appearances.

1. The Origins of Yoga

The first texts dealing with Yoga appeared between 700 and 500 BC in northern India in the last chapter of the Vedas, the oldest sacred books in Hinduism, also known as the Upanishads. The Upanishads is a collection of philosophical texts, aimed at unraveling the mysteries of self-realization and union, through ultimate knowledge.

Yoga then was only expressed through spiritual practice, taught orally from the acknowledged master to his devoted students through three main paths. Jnana Yoga (knowledge), Karma Yoga (selfless action) and Bhakti Yoga (devotion). The word asana translates to “sit” or “seat” and originally referred to the position adopted to listen to the guru and meditate.

Don’t be surprised then, when your teachers invariably tell you: “Yoga is more than physical practice” It is not a sport! Its fundamental goal is self-realization.
The essence of Yoga is manifested in the mutual understanding and proper control of our actions, our thoughts and our ability to achieve profound stillness of mind.

The classic translation of the word Yoga in Sanskrit is “Yuj”, which means to join or union.
The sacred union of de Brahman and Atman. Of the Absolute and of the self. From our individual consciousness with the universal consciousness

The Bhagavad Gîtâ “the song of god” beautifully summarizes the ancient sacred texts of the Vedas and the philosophical belief that we are all divine.

A major work still influencing modern practice is that of the Yoga-Sutras of Patanjali, written between the 2nd and 4th centuries BC. It is through 196 aphorisms that yoga is organized or “codified”. The Patanjali Sutras mainly deal with the functioning and the principal obstacles of the mind. They also provide techniques to be implemented in order to master the mind and continue on the way of Yoga. This work provides a clearer understanding of this art. Divided into four Pada “chapters,” Patanjali sutras justly takes us on the path of yoga in eight major stages, an “eight-limbed path” to Samadhi (State of Union with the Absolute). The lifelong pursuit of these specific stages is called Raja Yoga.

Below are the eight branches described in the Sutras :

A visible beginning of physical practice

It is in Hatha Yoga Pradipika around the 15th Century that the importance of physical practice was acknowledged. The author, Yogi Swami Svatmarama clarifies various points addressed in the Sutras of Patanjali, but above all recognizes physical health as essential to spiritual development.

“The Hatha yoga pradipika of Svatmarama is one of the most important yoga texts, and Hans−Ulrich Rieker’s translation and commentary have long been valuable to yoga students as a complement to their practice and study.”

“To acquire knowledge−−whether mundane or spiritual−−bodily health, mental poise, clarity and maturity of intelligence are essential”.

Hatha Yoga Pradipika by Svatmarama is divided into four chapters :

And so we ask, where does our modern practice come from?

In the 1920s, T. Sri Krishnamacharya traveled across India generously providing fascinating readings and impressive demonstrations to progressively develop and popularize yoga throughout his dear country. Widely acknowledged and passionate guru, it is in Mysore that T. Sri Krishnamacharya opens his recognized school with the valuable support of the Maharaja. Profoundly influenced by Hatha Yoga and the Sutras, he wrote in 1934 “Yoga Makaranda”, a book describing 42 asanas accompanied 95 photographs illustrating them.

T. Sri Krishnamacharya develops a very dynamic expression of yoga called Vinyasa Krama Yoga. He uniquely combines the asanas, the breath and the mastery of the mind in one and the same practice. Calming of the mind by focusing the attention on active physical practice and control of the breath. Although the latter has never left India, it is through these students who afterwards created their own style and traveled the world that yoga became popular on other continents. Indra Devi opened her modern studio in Los Angeles in 1948. Pattabhi Jois developed the Ashtanga Yoga style, BKS Iyengar emphasized precision and proper alignment in poses, etc.

T. Sri Krishnamacharya is known today as the father of modern Yoga.

Hatched from the sacred books of ‘Hinduism, yoga was originally a purely spiritual practice and has naturally blossomed in various style. Therefore it has delivered its ways over the millennia to become accessible to everyone, regardless of beliefs or religions. Behind each physical practice, each remarkable style of yoga, its fundamental essence undoubtedly continues to shine. Its peaceful intention is unique and universal, the self-realization.

How to choose the best Yoga teacher training for you

The Births of 4 Major Yoga Types

We use cookies to ensure that we give you the best experience on our website. If you continue to use this site we will assume that you are happy with it.OkMore Info